Comparing the Cost of International Schools Around the World

As loving parents, it’s natural to want to give your child the best possible start in life. For expat parents however, this can be a little more challenging than usual - particularly when it comes to education. By sending their child to an international school, expat’s choices are already more limited by default. And it turns out some cities are much more expensive than others…

At the International Schools Database we have just completed an analysis of international education costs around the world, and we found something surprising. While the cities that topped the most expensive end of the list won't come as a shock to many (Shanghai, Singapore and Seoul all made the top 10, as did three cities in Switzerland), three at the lower end will. Some of the cheapest cities to get your child an international education include Copenhagen, Amsterdam, and Abu Dhabi. 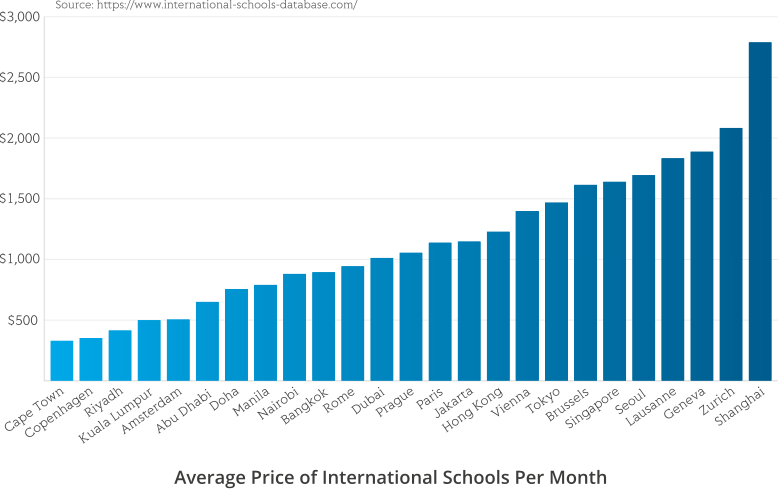 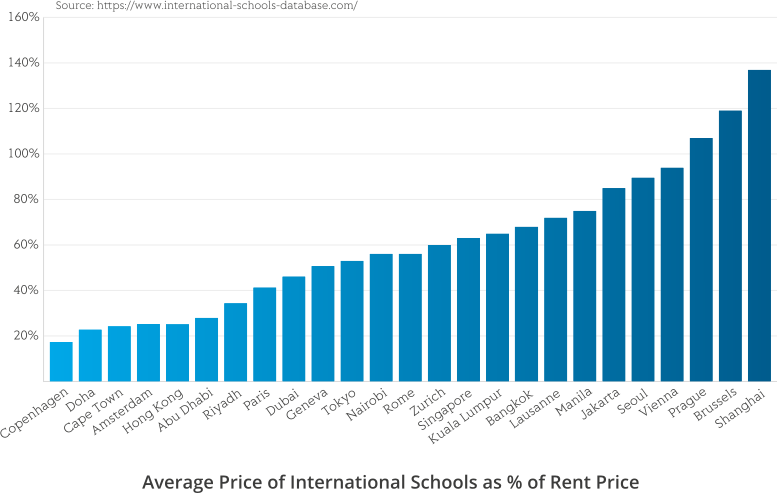 In Shanghai for example, monthly international education costs, at an average, $2,783 for one child. Since China's global education ranking is steadily rising year on year, that doesn't seem too unreasonable. Until you compare it with the cost of living there, of course. When we compare the cost of one month of tuition in an international school in Shanghai with the cost of the typical monthly rent there ($2,027), we can see that it would be 137% - more expensive than rent by a huge 37%!
If you're an expat in Shanghai and have to shoulder the full cost of schooling yourself (instead of as part of an expat package, for example), don't expect to have much disposable income per month.

Contrast this with Copenhagen, where the cost of education (only $345 per month) is just 17% of the typical monthly rent for expats (which is $2,018). If you're wondering how international education can be so affordable in a not-so-cheap nation like Denmark, it's because (long story short) government-approved private schools, including international schools, often receive the same amount of government funding as public ones. 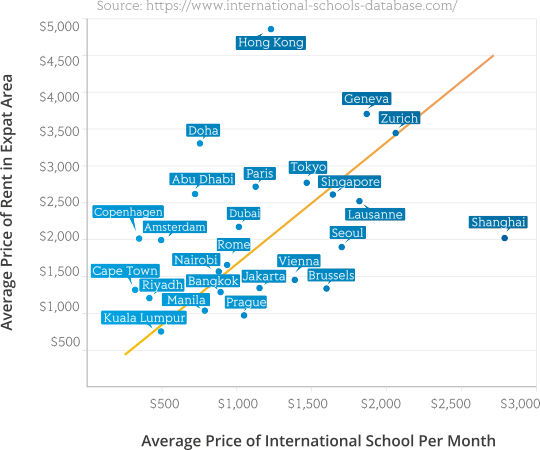 The above graph shows a significant correlation between local rents and international education costs. As shown above, in the majority of cities both costs tend to go hand-in-hand, which means that cheaper cities tend to have cheaper tuition fees while more expensive cities also have more expensive international schools.

This could suggest that international schools do not only depend on generous expat packages paid by big companies; they also (and often mostly) depend on locals and expats on locally-indexed salaries. This would explain why their prices fall in line with the local cost-of-living for expats.

The International Schools Database makes it easier for expats to find, research and compare the best international schools around the world. Our online database provides all the information parents need to make that all important decision, including fees, curriculum, student nationalities and more.

As expat parents ourselves, we know that price is a very important part of the decision of which international school to choose. That's why we made transparent and comparable prices an important feature of the International Schools Database.

Find and compare the data for your chosen city using the table below. If you require any further information or have additional questions, don't hesitate to contact us at andrea@international-schools-database.com.

For the price of rent, we used the price listed on Expatistan.com for “Monthly rent for a renovated 85 m2 furnished apartment, in expensive area of the city.” on April 1st 2017.

All prices were converted from the local currency into USD using the exchange rate valid on April 1st 2017.

Each school's listing includes full contact details, school policies, nationality information, extra-curricular activities, and much more. Everything you need to know is all under one roof, so you can make an informed decision on the best school for your children.

Email us your questions, experiences or feedback at andrea@international-schools-database.com.